The performance SPAZIO-TEMPO, by the Biella artist Gigi Piana, is a gesture of reflection on language, on the false and apparent communication that exists in contemporary society. You can choose dead words, black words, or bright, colorful words. The first are a spiral that little by little isolates the individual, making him deaf and autistic, incapable of producing and receiving the truth.
The latter are the only possible way to escape from that prison: traces of light and life thrown like rafts on a dead sea. It is a performance that begins as a solitary, individualistic act, and then engages the audience in a social dialogue with many political and anthropological references to the current social situation.
APRÈS-COUP Arte
Gigi Piana “moveo_ergo_sum (piccoli movimenti rivoluzionari)” curated by Sarah Lanzoni
photo project by Ewa Gleisner 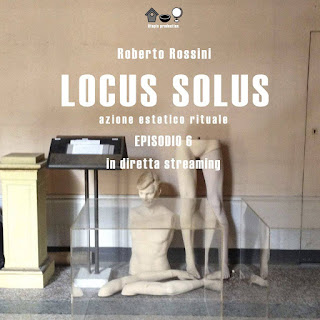 (Locus Solus = lonely place, but also a unique place…)
‘Locus’ that wants to be ‘solus’: a physical and mental space where there is still the possibility
of voluntary solitude. The project is developed in 7 episodes, linked to 7 different environments,
as in Raimond Roussel’s novel, which inspired and gave the title to the performance cycle.
In this sixth episode I will present a work about the fragmentation of languages, in the form of a ‘demonstration’, focusing the body at the center of a symbolic editing, knot of relationships with the outside world, from which often the gesture only can free it, restoring its individuality.
The environments where the performance will take place are a space of ‘suspended time’, almost
a biographical subjectivity.
Roberto Rossini, 2017, June.

Spazio Rizzato offers a collaboration with the artist Paola Michela Mineo presenting "SUDARIO", one of her performances born in 2012 and revisited today exclusively for Spazio Rizzato and Performance Art TV. The performative action, 6 years later, is reinterpreted in the experimental logic of Performace Art tv, the social web tv founded by the artist herself together with her colleague Francesca Fini with the aim of expanding the value of contemporary performative art as a social practice. The artists have experimented, with this innovative approach, that the particular format of streaming on the net, the use of a device like the smartphone, the ephemeral character of communication on social networks, are elements that overlaps provocatively with the idea of ​​"direct" as an extemporaneous creative process of the production of a work of art, they are able to poetically overturn the very meaning of the use of the smartphone as a filter through which we observe reali…